Get me outta here!

And now back for the Second theme parks post 😀

This post is going to be covering all of Magic Land. This had to be the first Disney inspired SIM that I came across after I joined Second Life. I love this place, everything about Magic Land is great. And this wonderful tribute park was created by the wonderful Kriste Beck & Pixie Ella, These two are such wonderfully kind and amazing people to come across. They tend to be around during many of the events run through the park. Like the parades and fireworks along with many other activities. There is a board near the entrance for upcoming events, do not forget to grab your brochure to stay updated. After landing on the SIM, you are set right outside the entrance. It looks very close to the actual park, walk through the little tunnel which on the walls are landmarks to a few other Disney inspired parks, and a note card on what to do if you want to wear a character costume through the park. Just so other guest do not confuse you as someone who works for Magic Land. Right now Magic Land is celebrating being in SL for 5 years. They have special events and parades going on. There are parades and fireworks here every weekend they have an events list you can checkout in the front of the park, and also the group sends out note cards to keep you updated on events and if characters have been spotted walking through the park. 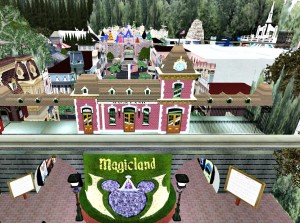 And after you step through the little tunnel, there will be City hall to the left of you. Inside City Hall you can get a map, a few souvenirs, and cute Mickey hats 🙂 . Theres also a contact area along with through out the park (trashcans) that you can click on for security if you ever find your self being troubled or greifed by someone.

Now that you have your Mickey Ears on , time to start checking out the park. The first area you are going to come across,  will be Main St. There are different shops that you can checkout and items you can purchase, along with a minny theater with Mickey movies playing. 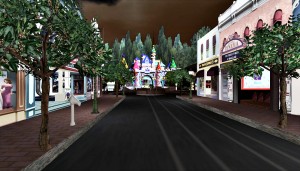 As you walk your way down the street passing little shops headed towards the Castle.

Once you reach the front of Cinderella’s Castle, There are a couple different ways that you can go. If you turn to the left in front of the Castle you will find yourself headed towards Adventure land & Frontier land. Down these paths you will find The Enchanted Tiki-Room (under-construction),  The Jungle Cruise, and Tarzans Tree House in Adventure land. 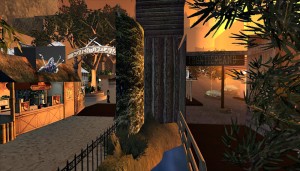 Fallowing down Frontier land you will come across shops that resemble the old-time wild west era. You can take a ride around Tom Sawyers island on the Mark Twain ferry boat. Or you can take a wooden raft and run around Tom Sawyers Island exploring the caves. There is also an area where you can catch the Disney Railroad that fallows around the outer skirt of the park.

Head under the Railroad bridge and walk up the hill, you’ll find yourself in The Hundred Acre Woods. There’s a Heffalumps & Woozles maze, you can explore Owl’s and Poohs home, plus a couple other attractions.

But, if you would have taken a right at Cinderella’s Castle , you would find yourself in Tomorrow Land.

This area is all about the future and what’s to come. There are a lot of rides in this area, two of my favorites are Star Tours which takes you on a ride and puts you right in the Star Wars movies. The other favorite is Space Mountain, a roller-coaster that sends you flying through space ( its pretty quick, make sure you hold on tight). 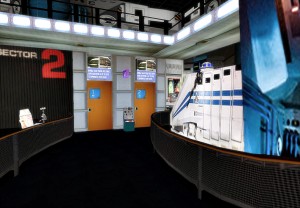 The other attactions you can check-out are : Circle Vision, Carosel of progress, Captain E.O., The People Mover, Astro Orbiter, Autopia, 20,000 leagues under the Sea,

And, also in the same general area is The Matterhorn. A roller-coaster that takes you up into a mountain on a bobsled flying past angry Yeti’s. Or hop on the Monorail and take a ride around the park.

The Matterhorn, Autopia, 20,000 leagues under the sea

It you went straight through the tunnel under Cinderella’s Castle you’ll find yourself right in front of a sword in the stone. You can try your luck at pulling it out, you never know maybe you’ll get it out and become the king or queen 😀

Sword in the Stone

Take a flying ride on Dumbo’ the flying elephant , or a boat ride through Storybook land where you can see what your favorite characters have been up to, and right next door take a ride on Casey Jr. Circus Train. 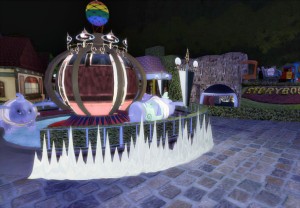 And last but not least for Fantasy land, which may be everyone’s old time favorite is Its a Small World. For everyone who knows this ride needs little explanation. But for everyone else, on Its a Small World you are taken on a boat ride traveling through different areas of the world. As these little doll’s sing and dance to the music. Getting a look at different cultures and languages.

So, now you’ve seen a few areas that you can visit while spending time in Magic Land. Like always I haven’t shown everything. I never want to take away from the surprises that fall along every corner. This is a wonderful tribute to The Magic Kingdom. They also change the decorations during the holidays , and right now they have an area set up for the movie Frozen. This was the park that I had been Snow White after first joining Second Life, I just hadn’t had the time to keep it up on a regular basis. But, it is still one of my favorite places to go too. 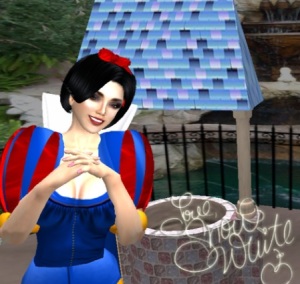 Me as Snow White

And with this picture I’ll end my second Disney park post. Anyone who loves anything Disney or The Magic Kingdom. Should head over this way, I think everyone will be pleasantly surprised with how close it resembles the actual park.

In my next post I’ll be following up with the other Disney Inspired park, which is WEDCOT that is set up like Epcot, and a separate area like The Animal Kingdom.

* Just to note these parks are not affiliated with Disney in anyway, nor do they create any earnings out of these parks. Any donations brought in are put right back into the parks to keep them running. If you love these places as much as I do toss them a few L’s to keep them up & running. Its always sad when anyone’s favorite place shuts down, so lets help keep them going

Toodles , till next time
TTFN~

Family fun can be found around every corner in the wide world of Second Life!

My foot prints around the grid

a sometimes intrepid exploration of a virtual world